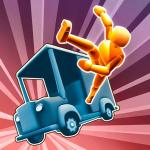 Turbo Dismount starts with a mournful cello announcing the many painful collisions you are about to unleash on an unsuspecting stick figure. Based on the cult Dismounting games, these 2D variants of the original 3D stickman accident simulation lets you indulge your inner sadist.

An interesting 3D game which you can also download via Steam. Your task will be to test the vehicles before they go on sale. Therefore, you will need to do several different crash tests. You have a variety of vehicles, but also barriers, so go for it!

The basic concept is deceptively simple. Just throw the stickman down some stairs, aplatform or any other construction and watch how they hopefully break multiple bones in their body. This is after all how to score points. The more spectacular the fall and inevitable crash with solid objects the bigger the impact. This may involve rotary saws, explosives or worse. At the beginning of each stage you get to pick a pose for your stick figure, as well as pick the strength with which they are hurled forward. Over time you may even unlock wheeled objects, to place them on or in. Watch them sit in a trolley, a chair or a hospital bed and push them into a pile of explosives.

As you chase after new ways to maximize damage, the stick figure will get thrown into the air violently. You may even manage to squeeze an achievement out of it, by having them flip in the air a dozen times or more. Thanks to the ragdoll physics engine used in Turbo Dismount the crazy and spectacular drops quickly gain a weird sense of physical comedy about them. Laugh at the repeated misfortune that befalls your stick figure and watch them break every single bone in their virtual body.

To make sure that you don't miss out on the actual damage you cause, particularly forceful crashes are accompanied by a slow down in animation, and a quick x-ray view of the limbs that have just been aggressively smashed and cracked. If that doesn't quench your thirst for needless violence and suffering, put them into a cart and eject them mid-flight for even worse injuries. Turbo Dismount is as much about beating a high score, as it is about giggling at the bad luck of your stick figure. The more destruction you cause, the better. Just like real life!

Do not miss other related games such as Short Ride and Rex Racer at http://abcya.xyz

Use mouse to play this game