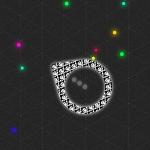 Tiang.io is an interesting .io game in which you control an object that needs to eliminate other players by creating a boxing triangle. Grow your size by collecting scattered dots and freeze other players by moving over them.

The main task of the multiplayer game Triang.io is to catch another player in the triangle. Eat colored dots to grow, so you can create a larger triangle. You can also accelerate. Enjoy and share with your friends!

We welcome all your comments and rating. Share it with buddies. Try to play Wormax.io and Narwhaleio from http://abcya.xyz

Moviment your player and put a node (SPACE), then go away and put another node. Put the last node when you realize it will form a triangle around another player.

If you are bigger than other player, you can move over than and he will be freezed for 5 seconds.

When you are running, you lose some points