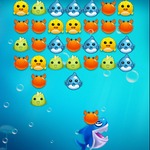 Shark Dash is an online HTML5 game presented by abcya online, it's playable in browsers such as safari and chrome. You can play the game on smartphone and tablet (iPhone, iPad, Samsung, Android devices and Windows Phone).

Simply drag and release the shark's tail with your finger to launch him at the ducks! Dispose of the ducks and grab the coins with the fewest jumps possible to earn 3 Stars! Make your way through 96 levels and 4 different environments! Complete tons of missions & unlock loads of achievements! Play with 4 different types of shark, each with their own ability! Grab enough coins and you can upgrade the appearance of your sharks with cool, new skins!

The players from all over the world fell in love with the game thanks to its beautiful songs collection, a simple gameplay, and the classy design. If you love, try it at http://abcya.xyz. Enjoy the relaxing playtime with other musical games like....