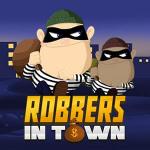 Your team of robbers is going to pull off a daring escape after robbing the local bank at https://abcya.xyz/. Will you be able to get both robbers out without being caught in the middle of a high-stakes heist? The goal in this game is to overcome all the doors while running to escape before the authorities catch up.

There will be tons of crates, boxes, walls and dangerous objects turning up on your escape path. It's your job to jump over uncertain pits, bypassing wooden crates, and avoiding the explosives as fast as possible. Don't hesitate to run as you flea from the scene of the crime! The hard part of this ABCya XYZ online game is the fact that you have to control both characters at the same time. Move each of them at a time and keep focus to avoid mistaking the buttons! Moreover, while making your exit, you will find plenty of additional cash for you to grab on the way.

It's the time to show your reflex, quick thinking and fast hand movements to grab all the extra loot bags that you can! Can you make it to the end with all three stars per level? Avoid the pits and explosives since they will end your stage immediately. Let's start the heist and continue with more journeys in other free games such as Birdy Rush and Monkey Pilot later!

Controls: Click and double-click the arrow keys to control the characters.