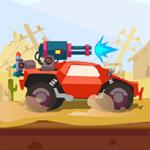 With the post-apocalyptic wasteland setting, Road Of Rampage promises to bring the players to an expanded world of this abc ya arcade game, where there is more than just simple waves of enemies. In this game, the players will control his or her own car with the bursting gun on top. While hitting the rampaging war, it's your job to keep your car intact from the bullets of the enemies.

By shooting precisely in order to destroy the enemies, the players can remove them waves after waves. More than just the ordinary blasting gun on the top of the car, there are more items scattered on the road that can help you with this mission. For example, the shield will act as the tool to reduce any incoming damage for you. The airstrike icon helps summon more aircraft so that you can demolish enemies faster.

There are also the repair balloons which serve as the healing items. Also, keep check of the hip bar and energy bar to make sure that your car doesn't run out of oil or any necessary part. Only by purchasing more updates and boosters can you optimize the capacity of the car and make it the strongest machines in the game at http://abcya.xyz. Precision is the most crucial element here to provide efficient shots. For more games that coordinate shooting and driving, check out some choices like Angry Bull Racing and Pick Up Rush later!

Tap on the screen or click the mouse to shoot.