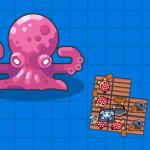 Dive into the refreshing gameplay of Raft Battle while showcasing your real talents in this intense simulation game! To conquer the whole map and defeat the neighborhood, you need to move on the water while controlling your raft. The goal is to collect all the + signs that you can see in order to increase the raft space, unlock features, and enhance the fighting traits. However, improving the space is not the only thing you need to do to guarantee your winning chance in this ABCya games.

It's very important that you get a giant raft to defeat the hidden monsters underneath the surface like the giant octopus. Also, aim for the other opponents' rafts and blow them up! Be brave while attacking and show good defense line by upgrading the raft to be the king of this territory. When you are in desperate condition, use the bombs to blow up some paths and clear the areas for more chance of escaping. Keep in mind that the bombs are limited, so use them wisely.

It's the type of genre that requires attention, skills, flexibility, and the best commanding techniques from the world of games at https://abcya.xyz/. Don't miss a single approaching raft or else you will get shot instead! Feel free to look up tons of high-quality graphics games such as Mineblock Dragon Adventure and Crazy Rushing Ball with the same idea for your enjoyment!

Collect the rafts and fight using the left mouse cursor.