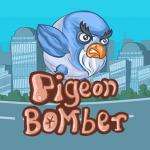 Your worst nightmare is here in the form of Pigeon Bomber! In this war zone, tones of war pilots with strange bombs of bird poop are towering over you! Not only will you have to watch for mountain peaks hidden in the clouds but you also have to watch out the bird. They will drop their bombs mercilessly on your head. Instead of ordinary enemy fighters, in this action game at ABCya XYZ games, you will guide the bird to bomb the pedestrians and gain high scores. How long can you keep the combos of bird bombs?

This game is hilarious as you get to enjoy the action of “bombing” innocent pedestrians and make fun of them! But the difficult part is to pay attention to the stoplights, hawks, and even UFOs. These are the items that will take you out of the game, therefore, avoid them at all costs. After a while, remember to dash closer to the ground to grab potato chips as these are your fuel. Be careful to avoid smashing into the poles while doing so! Speed and accuracy are two main elements that you need to master to conquer this amazing game at https://abcya.xyz/.

From flipping the wings, dashing down near the targets to drifting to avoid the obstacles, all of your techniques will go up another level after mastering this amusing gameplay. Don't miss out on more fun arcade games such as Ogre Defense and Woodventure!

Controls: Use the mouse or the keyboard to aim at the pedestrians.