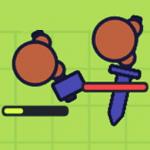 Only the strongest will survive in the rough world of the new survival IO game Moomoo .io! In the role of a brave hero with a hammer, you have to explore the map and collect different resources like cows, wood, stone, and food. You need resources to level up and build useful stuff like walls, traps, weapons and most important - build your own village with a lot of windmills. The main goal of the game is to get on the top of the leaderboard by earning the most gold, which is generated by the windmills. Like in the popular survival game RUST, you can also kill other players for their gold. Strength, level and experience of the players in Moomooio are measured by ages. To reach the next age your character has to craft a certain amount of resources; entering the next level will provide your character with better weapons and different power-ups.

You may also like: FlyOrDie .io and Raft .io

You can only kill other players who are younger or the same age as you. The bar above your and other players' heads is health, thus you can see how many more times you have to hit your opponent till he dies. Build your village and expand it as more as possible during the game. You must also protect your windmills and village from other Moomoo IO players. In the age of 3 you can use a cookie bonus which restores your health, in the age of 4 you can set traps to kill other players. There are 3 different playfields: desert, forest and snow. In the game store you can buy different hats and even animals like cows or bulls, but be aware of your enemy's animals and try to kill them.

Controlling your character in Moomooio is very simple: use WASD or ARROW KEYS to move and MOUSE to look around and attack your opponents. Click or press 1-9 to select an item and Q to select food. In Moomoo IO players can also communicate with each other, press ENTER to start a conversation. The current version of the game has 2 modes: normal and party. Party mode allows you to play with your friends like a team, just choose the party mode before entering the playfield and share a special code with you friends so they can join you.