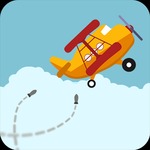 Missiles! Can you avoid them all?

Do you want to show your skills and style? Don’t forget to play more with some similar games such as Aztec Escape and Cyclops Ruins at http://abcya.xyz/