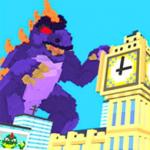 The war of Men vs Monsters goes endless PvP in the stunning ManOrMonster.io at http://abcya.xyz/! Which side will you choose? Can you unlock all the amazing units and creatures? Invite your friends to join you in Party Mode. However you choose to play, the destruction and mayhem is guaranteed in city maps from around the world.

Enter the block city of chaos and start the fight in this fun multiplayer online Man Or Monster IO game. You can play as a huge monster bringing terror to the city, or as a human trying to get rid of all monsters. Use different attacks to earn points, level up and unlock new characters. Register to progress or just play some quick rounds as a guest. Do what it takes to wear the crown and be the best on the scoreboard.

Invite your friends to play the game and do not forget to share the fun in this game with them. And if you love this game, play some other similar games like Slither .io and Hole .io

The monsters are out to pop the city like bubble-wrap while the men are the last hope for, well, mankind. If the monsters kill enough of defenders, they trigger their Ar-man-geddon, a meteor storms that impacts indiscriminately, but if the mans kill enough monsters, they get to nuke all the remaining monstrosities.

Best for your team to focus on the main objective, though in a free-for-all, there's often little honor amongst monsters, men or any hybrids that may emerge.

Key to advancement is to collect the green points for leaderboard domination, yellow xp to level up and then to unlock ever more powerful units and creatures.

Snag the dropped coins to buff vehicles and monsters.

If in doubt, destroy it.