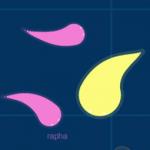 The new io game! Play with players around the world and try to become the biggest slug! Team up and crush other players.

Everybody hates slugs, but in the awesome IO game "Limaxio" they are colorful and look really nice, so don't waste any more time and enter the world of Limax.io! This game is very similar to another popular IO game Slither.io. In Limax.io players are in charge to control cute luminous slugs and make them fatter and fatter by eating colorful orbs, scattered all over the map and other players.

Unlike other snake IO games, in which your character dies if it touches the body of another player with it's head, in this game you can freely move through other players and hit them with your head. To kill other slugs you have to accelerate and let your opponents hit the colored track you've left behind. Only your boost trail can kill other slugs. The colored track won't stay on the map for a long time, so you have to act very quickly and don't forget that while boosting you loose some of your mass. The main goal of the game is to become the biggest mollusk and get to the number 1 spot on the leader board, but don't think that the huge size will make you invulnerable, small slugs can easily kill the big ones.

Check out some similar games like BrutalMania .io and Oceanar .io

Navigating your mollusc in Limax IO is very simple: you only use your mouse cursor to direct it and left click to boost your character and leave a deadly trail behind you. In the current version of Limaxio players are able to choose one of 7 game modes, change the theme and customize their slugs with different skins and nicknames. Seven modes are: Mass. Team, Kill, Race, 1vs.1, Rush and Zomb, so choose whether you want to play a quick game, normal or together with your friends as a team.