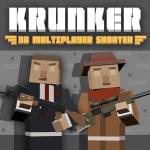 You can modify your character and other elements of this first-person shooter game. But how long will you last while you compete against players from all around the world? Grab a weapon and start shooting!

Krunker.io is the cartoon first person shooter in which you are thrown into the boots of a pixel soldier in the midst of battle. Use your warfare tactics and sharp shooter aim to defeat all of your enemies on the battle field. Watch cool animations appear on screen as you kill enemies and gain score points.

Beat your foes in the 3D online multiplayer Krunker.io! In this shooting game you pick your preferred class to own your enemies with in multiple game modes. Be king of the hill in a free-for-all, or cooperate with teammates to win in a team deathmatch.

You have a selection of up to 5 characters to choose from to take into battle. Jump in to an online multiplayer game and prove you are the ultimate solider. For added fun get out your spray gun and spray paint on walls or your enemies!

The game is currently in beta. Many updates are to be expected.