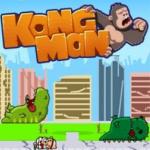 We all know the story of the mighty Kongman that get trapped by the evil scientists. After being experimented on and kept in a cage for years, we give you the chance to unleash your anger on the city in this ABCya free game! The mission is to start smashing everything that comes across your path in this city. There are tons of buildings, bridges, infrastructures, and sky-high skyscraper for you to do so. Just move from one place to another and smash at any object that you like. It's created to de-stress after a hard working day so feel free to do anything that you like!

However, because the powerful ape isn’t invincible, you still need to be careful. Punching an entire floor of a building or smashing a whole bridge is no big deal, however, if he gets attacked by aircraft or powerful force such as an entire balcony, he will still get hurt. Moreover, it's the overhang that you need to stay away from. While he is smashing buildings to bits, the overhangs can fall and damage his bare hands, so this is one crucial point that you need to pay extra attention to.

The game has attracted players of all ages to https://abcya.xyz/ for a fun playtime. Would you like to experience the thrilling sensation in more games such as Power Wall and Robot Police Iron Panther as well? Take a look now!

Instructions: Use the mouse or arrow keys to smash the objects.