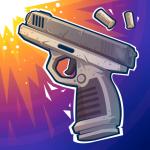 Gunspin will test your most precise shooting skills, whether it's a close-range or in a far distance. The game emphasizes on the shooting technique and the spinning skill as well. The goal for players in this ABCya free game is to shoot your enemies using your sole weapon. Pay attention to the mechanism of the guns so that you can use its recoil momentum to shoot the bullets as far as possible before running out of ammo!

Once the ammo runs out, your turn is over. The first and foremost mission is to pick the right direction, then it comes down to shooting and aiming. Don't forget that you can freely spend your earned coins on boosters, bonuses and other power-ups to switch up the statistic of your gun. Doing so will allow you to improve not only your shooting range but also the damage range for the next stages. Different styles of guns are for different circumstances, therefore, pick wisely to avoid losing.

For example, the Bold Gun and Warlord type of gun gives you an extra 15 percent for firepower, while Shot Gun and Hell Gun are different in usage and capacity. In this shooting game at https://abcya.xyz/, there is a total of 9 stages with 18 powerful weapons for your consideration. Are you ready to take the first shot as the main shooter? Don't forget to practice some more with games like Stickman Maverick: Bad Boys Killer and Clash Of Armour!

Click, drag and move the left mouse to aim and shoot.