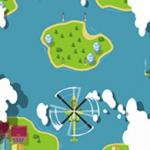 Should you want to survive the rain of bullets in Great Air Battles, learn the best skills for shooting from the other players in http://abcya.xyz/! This new game with the theme of air battles brings a realistic experience with the most powerful choppers on air. The game takes on an endless feature for a shooting game, which means that your ultimate goal is to break all the previous records on the Leaderboard.

Use the given navigation stick to move the chopper and shoot furiously at the air above as you come across the enemies. There is no limitation on the number of bullets for each turn, however, keep an eye out for the gasoline, lives, and bonuses. The more bonuses and boosters you can gather, the more chances you have to survive the vicious attacks! It's a thrilling and fast-paced game where players must blast through the enemy ranks, therefore, don't zone out for even a second. Avoid the bigger aircraft and outmaneuver their attacks to keep yours intact!

A tip for the newcomers in this ABCya XYZ online game is to keep your foes in front of you so as to progress throughout the different lands. Will you demonstrate the unpredictable dip from left to right and blast out on the map? If the action-based genre of shooting games are your favorites, don't hesitate to check out more games like Hunter Willie and Shoot Angry Zombies!

Control: Drag the mouse or use the arrow keys to navigate and move the choppers.