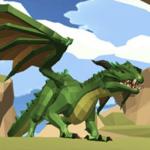 A fairytale universe full of adventure, flying islands and magic awaits! Collect different breeds of dragon and create new ones! Battle in tournaments against other players! Prove that you’re the best dragon keeper the world has ever seen!

Dragons flying around a huge forest, fighting each other on air and ground spitting flames. That’s already a cool image, isn’t it? In Dragon World, a cool multiplayer online battle game, you can actually play as one of those dragons. Try to kill your opponents and earn experience points to level up and upgrade your beast. Learn how to fly, spit fire and fireballs and become the most feared mythical creature on each and every room.

You can choose to play other similar games at http://abcya.xyz/ such as Super Crime Steel War Hero Iron Flying Mech Robot and Fort Building Simulator

Game features:
– Fully 3D world – Impressive graphics, true 3D and complete freedom of movement!
– Variety – Over 300 dragon breeds from different environments with unique abilities. Breed absolutely incredible dragons and track their achievements in the Book of Dragons!
– Battles – Train your dragons, make armor for them and use magical amulets. Send dragons to the tournament and win!
– Thousands of players around the world – Visit your friends’ islands and get gifts. Challenge other players and take first place on the League Table!
– Global map – Huge archipelagos of flying islands!
– Regular updates – New quests, new dragons, new magic items and much more every month!