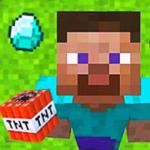 Crazy Steve io is a classic mass gaining io game. While you keep getting fatter some one small and fast will blow you up! Attention!

If you are that type of person with weird and slightly twisted sense of humor who laughs at the sound of a fart, then you are surely going to have fun with this top-down game with pixel graphics. Control a little character on a screen full of other players and just try to kill them all using different sorts of weapons, like swords, TNT or some other odd things you can throw. Also, you have to absorb food and diamonds to earn points and become bigger. Try to lead the match and don’t give your enemies a chance.

The game is fun and colorful, therefore, it's the perfect choice for you in http://abcya.xyz, along with some other fashion games like Skribbl .io and Worms Zone. You can be a Super too at abcya 5!

Have fun with Crazysteve IO!

The objective is to grow and get points, just like in Agar.io, but in this game we will pick apples and diamonds, and we can throw dynamite to kill the other players, total madness, the more you grow, the faster you will become. vulnerable, but you will throw bigger bombs, which by the way you can only throw 3 bombs at a time. Collect diamonds that will make you grow faster.