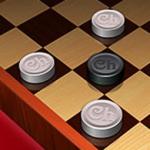 To become the best in the tournament in Checkers Legend at https://abcya.xyz/, use your head to think several moves ahead of your opponent. It's one of the classic games that are suitable for a mind-teasing playtime. If you haven't been familiar with the rules, let us guide you through this detailed tutorial. You will have your own set of checkers. Your job is to move your pieces diagonally on the board with the aim to jump over your opponent’s pieces to remove them from the board. The more pieces you have left, the more chances you will win.

Not only is this a true test of strategy but its thrilling sensation is not less than any other action game. Smart thinking is the first factor for a good game. What comes next is your ability to show good offense and an even better defense within one match. When you progress to the hard mode, it will not be as easy as the warming-up levels. It's time to dive into the battle with no hints or second chances here.

One wrong move and you might lose your piece of checkers! ABCya XYZ game has witnessed some very talented players that managed to turn a simple piece of a soldier into the king and queen of the checkboard. Will you pull a move like that as well? Take some time off with other cool puzzle games such as Bus and Subway Runner and Boxing Fist Legends later!

Instructions: Use the mouse to move the pieces.