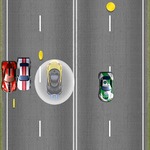 Car Speed Booster is an online HTML5 game presented by abcya2, it's playable in browsers such as safari and chrome. You can play the game on smartphone and tablet (iPhone, iPad, Samsung, Android devices and Windows Phone).

Car Speed Booster is a vertical runner game. Beware of other incoming cars and collect as many coins as you can. Drag the car to control.

Will you make it to the end of this chaotic race track? Collect upgrades and avoid enemy cars along the way.

We are so happy to receive your feedback. Then, share with your friends to have fun together and don’t ignore many similar games such as Escape The Fuzz and Cars Traffic Control at http://abcya.xyz