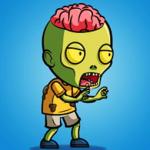 Brains.io Online is a zombie apocalypse survivor game in which players become zombies or heroes, trying to survive or infect depending on the position.

Brains io is a fun, zombie-themed, match-based multiplayer online IO game. All players start each match as humans, once the outbreak happens, zombies will hunt down players and turn them into undeads. The goal is for the humans to hide and escape until time runs out. If a human is still alive by the end of the match, humans win. When a player turns into a zombie, he automatically joins the zombie team, having to chase remaining humans. If all humans die before the end of the match, the zombies get the victory. Brains, Braains, Braaaaaaains.

Share this fun game with your friends and invite them to play. With vivid graphic design, you will feel great to fly in the air. If you love the game you can play more games like Shotz .io and Ninja .io at http://abcya.xyz/ for more fun experiences.