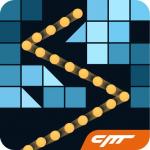 If you are a regular at the ABCya XYZ game collection for arcade fans, this new game called Balls & Bricks will no doubt be one of your favorites! It's another chance to show off the ability to bounce the white balls up against the wall filled with bricks. Of course, the goal is to increase your number of bricks breaks and maximize that number if possible.

Before making any move, first, let's take a look at the setting of the bricklayers and come up with the best route. Once you are ready, change the direction and direct the ball to move smoothly and gather all the items falling from the wall. The more gifts you collect, the easier it gets once you get to the hard level. Do you know what will significantly change your scores? It’s the diamond that is the gem of this game at http://abcya.xyz/.

It might seem a bit challenging for new players to follow the fast movement of the white balls at first, but the more you play, the faster you will get the hang of it. Don't lose focus on the ball since it's the most important than anything else. Let's find out how many new levels you can unlock daily! Keep on enjoying tons of cool games like Cat Gunner Vs. Zombies and Zombies Can't Jump 2 without the interfering of ads or anything else! Save them for sharing later!

Controls: Use the mouse to choose the direction of the ball then release to shoot.