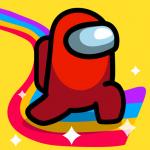 Occupy the territory of other players in the popular io game called Amogus .io. ABCya XYZ supports players in many challenging journeys. You are sent to capture the YRZ-15 space station. Fight other impostors for the territory. Each player has a different color for the area they choose. Don't let the enemies of Amogus defeat you. If they cut your movement and expand your place, you lose. Therefore, observe the distance traveled by other players and expand the territory with the smallest circles. If you are too greedy, you can lose at any time. Capture territories, defend your borders, and capture the entire station area.

Can you become the best player in our updated journey? When the impostor runs out of its territory, it is vulnerable to attack and leaves a trail. If you touch the trail, you will end the game. Join this battle with the strategies you have at any time. Keep your trail safe and attack the enemy's trail. Conquer the largest territory in the station and take the crown. Find the exact move position and expand your area to fight other players. Each game tip becomes useful to you in each choice. Complete and share the gaming skills you have.

Unlock different missions in the journeys you have at https://abcya.xyz/. Many players have shared this with their friends this new game. Each turn will help you have different moving skills and learn many new things. Relax in the journey you have today. Some games similar to this game are updated for you to join such as Who Was Who. Don't miss your fun relaxing moment.

Instructions: Use left mouse, WASD or tap directly on the screen