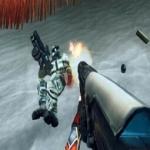 Complicated action games such as Alien Planet 3D Shooter have more movement and features, which makes them both harder to control yet more interesting to dive into. If this shooting game falls into the category that you love, why don't you take a shot in our new shooting simulation 3D game?

As one of the elite soldiers joining the battle, you will also be equipped with the most modern weapons from the collection at Abcya shooting games. Now, using these tools and equipment, your job is to survive for a long time so as to defeat the enemies. The simulation and main theme resemble those of the classic Half-Life, but there are plenty of twists to make it unique in its own way.

Each of the levels comes with its own level requirement which you need to accomplish. Only then will you be able to unlock the next stage. While moving around finding enemies, we want to remind you to focus on your current health bar and bullet numbers. Keep yourself safe and try to shoot them down before the health bar runs out.

Also, it's very important that you carry out the tasks at http://abcya.xyz. by taking the minimum damage from others. Beware of hidden corners with troops or large groups of enemies that are surrounding you. Other action games like Rebel Attack Shooter and Alien Infestation Fps also have the same kind of interactive features for the fans of shooting games!

Move with WASD, jump with the space bar, use Left Shift to run, R to reload, Left Ctrl to crouch, X to get down, Mouse to aim and shoot, 12345 keys to switch weapons.